The New England Patriots are in need of a new signal caller to help propel them back into the playoffs, and they’ve found their man in LB Nakobe Dean. The University of North Carolina product is projected to be among the top ten picks on day two. 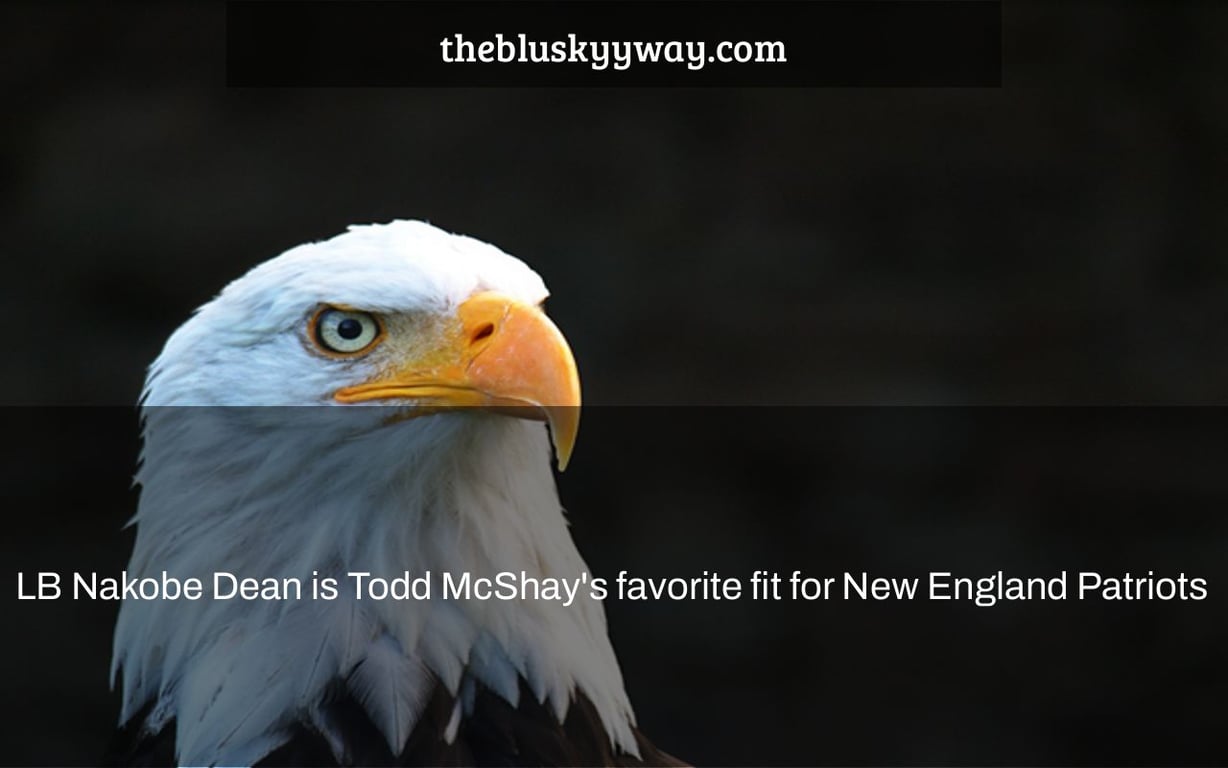 FOXBOROUGH, MASSACHUSETTS — Quick thoughts and observations on the New England Patriots and the National Football League:

1. Is Dean a good match for the Patriots? Last year, ESPN draft analyst Todd McShay predicted quarterback Mac Jones to the Patriots at No. 15 in his final mock draft. Jones’ skill set — particularly a flair for precision and decision-making — was perfectly matched by McShay with what the Patriots coveted at a critical position of need.

Inside linebacker is one of the Patriots’ most pressing needs this season, and McShay has identified one player in particular that piques his interest for Bill Belichick’s squad in the 2022 NFL selection, which begins April 28 on ESPN.

“The one person I’d kill to see with the Patriots — simply because I adore him and know where he’d succeed the greatest would be with Bill — would be [Georgia’s] Nakobe Dean,” he remarked.

“I’ve spoken to him and met with him, as well as other scouts, and we’ve all agreed that there isn’t a greater football IQ player in this class. When you combine that intelligence with what New England tries to do — they’re so diverse and varied from week to week — it’s a lot of joy to watch.”

Former Jets and Dolphins GM Mike Tannenbaum ranks Dean 17th to the Los Angeles Chargers in his ESPN mock draft, so he could not be available for the Patriots’ first pick at No. 21.

If Dean is available, though, longstanding watchers of Belichick’s selection history with inside linebackers remark that he would constitute a significant departure in strategy. The reason for this is because Dean, at 5-foot-11 and 229 pounds, is much smaller than the Patriots’ ideal (think 6-foot-3, 260-pound Dont’a Hightower).

McShay compares Dean to Jonathan Vilma of the New York Jets and New Orleans Saints, as well as Zach Thomas of the Miami Dolphins. Those guys were great playmakers, particularly in space, and weren’t renowned for racing downhill and taking on guards, which was a mainstay for those playing the position under Belichick.

And, given how the NFL game is becoming more spread out — and considering what the Patriots now face twice a year with read-option concepts from Buffalo Bills quarterback Josh Allen and Miami Dolphins quarterback Tua Tagovailoa — perhaps Belichick is more willing to consider Dean in 2022 than he has been in the past.

“Find me a speedier linebacker in this class in terms of play speed,” McShay said. “You’re talking about nine players on Georgia’s defensive line who may be taken, and he was the best of them. You’re talking about a man who is two steps ahead nearly every snap, despite the fact that he has two linebackers next to him in [Channing] Tindall and Quay Walker, both of whom will be picked on Day 2.”

3. Cornerback market: The Patriots would like to draft and develop a replacement for cornerback J.C. Jackson, but their first-round pick of No. 21 may not be the best value.

Top cornerbacks Ahmad “Sauce” Gardner (Cincinnati), Derek Stingley Jr. (LSU), and Trent McDuffie (Washington) are expected to be off the board by then, so the Patriots will concentrate on the second tier. McShay favors Kaiir Elam (Florida) and Roger McCreary (Auburn) as Day 2 options among the bunch.

“They’d make terrific Patriots because they can tackle and play both man and zone defense. They may be many and adapt to weekly game plan modifications “he said

(Your devoted scribe pounced on McDuffie when he was suddenly available in a beat-writer mock draft for NewOrleansFootball.com.)

4. Schedule preparation: The Patriots have a long list of intriguing non-division opponents this season, including Arizona, Cleveland, Green Bay, Las Vegas, Minnesota, and Pittsburgh, and a league source said the NFL is expected to unveil its schedule in the second week of May. According to a source, the Patriots are unlikely to be selected to face the Cardinals in Mexico or the Packers in London this season. According to the New England brain trust, the team’s next international game will most likely be in Germany in 2023.

5. Jonnu’s offseason: One of the most significant things to come out of the NFL’s annual meeting from a Patriots perspective was learning that tight end Jonnu Smith plans to spend the offseason as part of the team’s voluntary offseason program. Smith didn’t do that last season, in part due to the birth of his daughter and COVID-19 considerations. Some around the team believed it wasn’t a coincidence that fellow tight end Hunter Henry — who had spent the majority of last offseason in town working with Jones & Co. — had a more productive first season in New England than Smith. Henry, by the way, was back in town last week.

Why not Williams, for example? When McShay saw the Patriots lose 47-17 to the Bills in the playoffs, he noticed a lack of pace and difference-makers on the perimeter, both offensively and defensively. It’s why, if the board went that way, he’d back Alabama receiver Jameson Williams at No. 21. Williams’ recovery from a ruptured ACL will take some time, but McShay said he wouldn’t be shocked if Williams ends up being the greatest receiver in this year’s selection. “I just think the pace, having a guy who can go vertical and grab the 5-yarder and go 35, 40, 50 yards with it,” he added.

7. Matt LaFleur’s void: In 13 NFL seasons, Packers head coach Matt LaFleur has never visited Gillette Stadium, the league’s only older facility, according to him. “I hear it’s tough to win up there,” he remarked, referring to the Patriots’ 130-31 home record since 2002, which is the best in the league (although New England is 9-8 at home over the past two seasons). These are the kinds of morsels a writer picks up during the NFL annual conference, when running into coaches and striking up a chat is usual. The Packers aren’t expected to visit until 2026, according to LaFleur’s timetable.

8. Patriots Hall call: The Patriots Hall of Fame committee will meet Wednesday to select the list of contenders for induction this year, after a one-year COVID-19-related delay to enable 2020 nominee Richard Seymour to have the player stage to himself in 2021. Mike Vrabel has been a finalist five times but has never crossed the goal line. Maybe this is the year for him. Vince Wilfork and Wes Welker are newcomers to the competition, and if they make it past the committee as the three finalists, it will be fascinating to watch how the fans vote in the final round.

9. AFC East tax for Parker: From the standpoint of the Dolphins, selling receiver DeVante Parker and a 2022 fifth-round selection to the Patriots in return for a 2023 third-round pick is a great deal. Parker was Miami’s fourth-best receiver behind Tyreek Hill, Jaylen Waddle, and Cedrick Wilson, and his base salary of $5.65 million in 2022 and $5.7 million in 2023 are now off the books. While some may criticize the prudence of dealing Parker inside the division, it’s difficult to imagine any other NFL club would have offered a trade with a third-round selection in 2023. And if the Patriots weren’t anticipating a third-round compensation selection as a result of Jackson’s free agency exit, the transaction wouldn’t have happened.

Did you know that? Last week, the Patriots acquired Parker and agreed to a one-year agreement with safety/punt returner Jabrill Peppers, making them the team’s sixth and seventh first-round picks, respectively (2015 and 2017, respectively). McCourty (2010), receiver Nelson Agholor (2015), offensive lineman Isaiah Wynn (2018), receiver N’Keal Harry (2019), and Jones are the other players (2021).

Best sites with photos and images to download for free

How to Update iTunes on Windows Computers [All Versions]