A penetration test is a process which systematically tests the security posture of an IT system or network by simulating an attack from outside. This can be done manually, but when performed automatically, it becomes known as automated pen testing. The primary goal of any pen test is to identify vulnerabilities in order to make your systems more secure and harden them against cyber attacks., 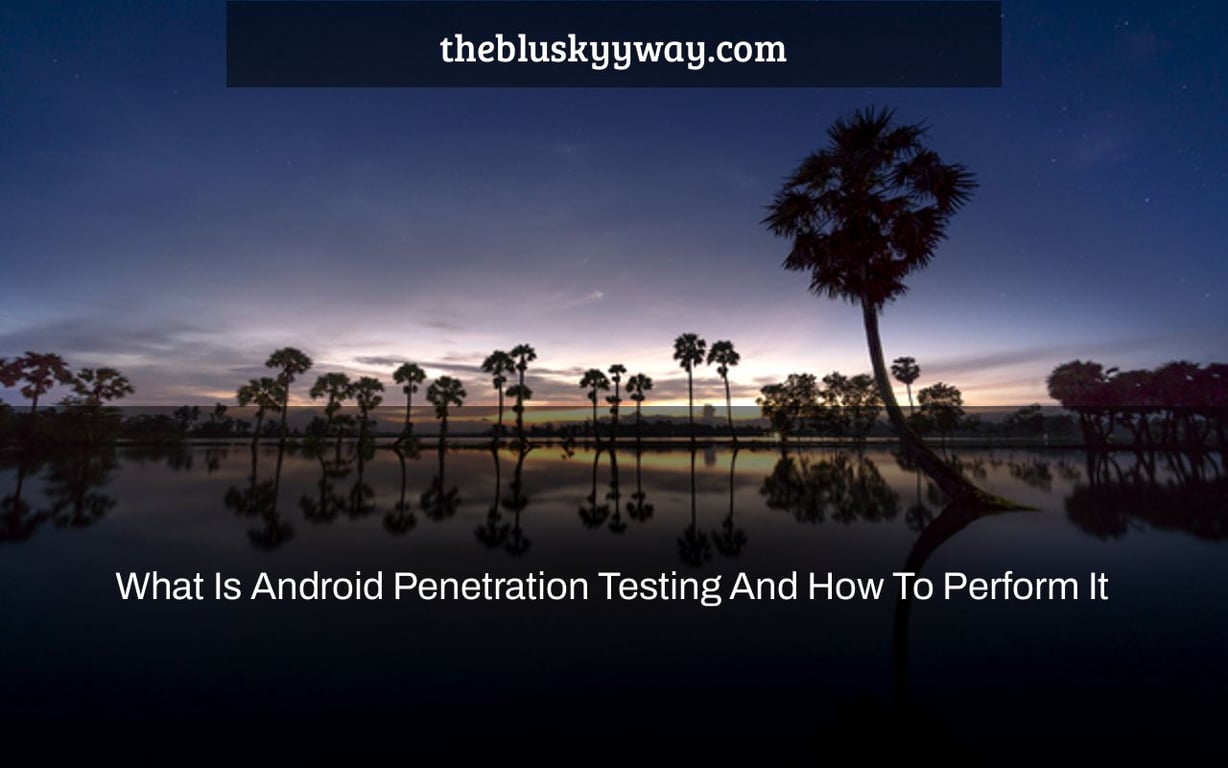 What is Android Penetration Testing, and how does it work?

Android pen-testing or Android app security audits are other terms for Android penetration testing. It is the process of examining a mobile application for security flaws that hackers could exploit. These flaws may lead to the following outcomes:

An Android penetration test may be divided into five steps. Let’s have a look at each stage separately:

The first step is reconnaissance.

Surveillance is the first step in Android penetration testing, when you acquire as much information as possible about your target application.

Android penetration testing also include identifying and prioritizing your Android application’s most important flaws. This is accomplished by running a threat model on your Android app, which finds any possible vulnerabilities or weaknesses that might be exploited.

Android apps often use a web service to store data and interact across devices, or even between different apps on the same device. These endpoints are often not properly secured, making them a tempting target for attackers.

Android app security, like Android penetration testing, focuses on finding and prioritizing possible vulnerabilities in Android applications. Once you’ve discovered the most crucial ones, you may test them to determine whether they’re exploitable or not.

Checking whether the vulnerabilities you’ve exploited are exploitable and then taking actions to fix them are all part of Android pen-testing.

Burp Suite Pro, Astra Security Suite, DroidBox (JEB), CuckooDroid, and a few more are among the tools used. The Android pentesting tools listed in this blog article are only a few instances of what you can do.

Exploitation of Android If you perform all of this and then forget about it, your Android app will be incomplete. Android pentesting is done on a regular basis to confirm that the vulnerabilities discovered before are still present or have been addressed.

After you’ve patched things up, you should retest to make sure the modifications you made are working.

In your Android penetration test, you must incorporate the following two steps:

1. Proxy for the Internet

Android applications use the Android Interface Definition Language (AIDL), Android IPC, or Android RPC to connect over the network. A proxy may intercept these and figure out what data is being delivered and received inside your application.

Before you begin an Android penetration test, have a look at your source code to see if it has any security flaws. Otherwise, your Android pentest is unlikely to be successful.

You Can Use These Resources:

XMind is the source of this information.

Penetration testing for Android is a means of safeguarding your app against attacks. This article explains the fundamentals of this sort of security, as well as how to conduct it and how to get started. So, to do the evaluation properly, follow these procedures and directions. We wish you success in all of your endeavors!

The “android pentesting github” is a command-line tool that allows you to perform Android penetration testing. It is also available in the repository on GitHub.

What is android penetration?

A: Android penetration is the proportion of devices that are running on Googles Android operating system. It peaked in 2013 and has declined since then, but it still commands more than 75% of all active mobile device market share.

What are the steps of penetration testing?

A: There are a lot of steps involved in performing penetration testing. However, some basic things that you should do before conducting a real life attack is to determine the target and scope out its security. This includes finding vulnerabilities such as weak passwords on routers or outdated software versions that would make it easier for an attacker to take advantage of their systems weakness. Once this has been accomplished, they will then develop an exploit, which could be anything from sending spam emails with malicious attachments to installing malware when your company doesnt have updated antivirus systems. They will also develop payloads if necessary (such as returning false positives) and decide how best these actions can create maximum damage against the targets environment while creating minimal risks to themselves

What is mobile penetration testing?

A: Mobile penetration testing is the act of evaluating a mobile application to identify security weaknesses. It often includes methods such as fuzzing, scanning, and exploiting vulnerabilities in an attempt to gain unauthorized access.

Can’t drop down in Horizon Forbidden West? Here’s what you can do [Fix]